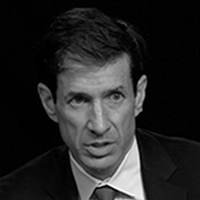 Stephen joined from Goldman Sachs where he spent 20 years in various senior roles, including Global Head of Leverage Finance, Co-Head of Global Loans, Member of the Firmwide Risk and Firmwide Capital Committees and Head of Loan Sales and Secondary Trading (Proprietary Investing and Flow Trading). Stephen had been a partner at Goldman Sachs since 2004. Prior to re-joining the firm, Stephen was a managing director and head of Loan Syndications, Sales and Trading at Donaldson Lufkin & Jenrette (DLJ), after starting the business at DLJ in 1996. Mr. Hickey was a member of the Board of Directors for the Loan Syndications and Trading Association from 2001 to 2006. Stephen earned a JD and an MBA from Columbia University in 1987 and a BA from Yale University in 1983. Stephen is a member of the State of Connecticut Bar.